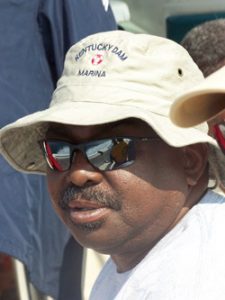 It all began when the State of Illinois was in its infancy stage; Indians still roam the flat mid-western plains, as it was a vital source for food and survival. Deer, wild game like Cows, buffalos, and yes even Raccoons as well as flying fowls were the delectable that comforted a many Indians plates. All of this rested in the State of Illinois, as well as corn, wheat and other grains. Cowboys, as they have move to take over land, have chased the Indians from all of the westerns states like Missouri, Kansas, and Nebraska just to name a few. When in the process, one night camping, along the Iowa borderline, Wild Jack, Coyote Bob, and Luke Hollow, were in the middle of a deep sleep. At the stroke of midnight, some frustrated Indians from the Iroquois Tribe, out of Iowa, tired of moving eastward, tired of loosing homeland, and just fed up with the cowboy’s ego, attack Wild Jack and the boys and cut off one leg, up to the knee, of each of the Cowboy, tied them up and let them bleed to death. Days later when people from Wild Jacks’ hometown found them, they were so upset that they were going to seek revenge on any Indian that they could find. They knew the Indians had done it because the Indians also scalped each one of the Cowboys and left their Warriors Spear as a sign.

Well one day, this group of Cowboys seeking revenge happen upon a Indian, in Illinois, hunting for food, and decided that they were going to do to him what some Indians had done to their friends, Wild Jack, Coyote Bob, and Luke Hollow. After they grabbed the Indian and tied him up, one of the Cowboys, as they began to cut the Indians leg off, kept repeating that this is for killing my brother Luke Hollow. The Indian could not understand English, but saying Hollow…..Hollow, as they cut off the leg up to the knee.

So, even until today’s time, that Indians’ body was never found, but it has been spotted, visually from afar, and occasionally, a camper or two has either disappeared or was found dead with one of his leg cut off up to the knee. If you are a camper or are just camping overnight, if you put your ear to the canvass of the tent and you will be able to hear the moaning, and groaning of Stumpy Hollow.  Stumpy has a particular liking to young campers, so for the little ones, never be in the woods alone, always travel in pairs, and if you are in the tent and fall asleep before 10:00 pm chances are that Stumpy will never get to you, because he mostly, not always, but mostly canvas the campgrounds after 10:00pm.

If you would like to post your fish tale or legend story on our site, please send them to:

Send us an email and we'll get back to you, asap.

Join us on one of our fishing trips! See the Schedule